This Quasar (the red dot in the center) is the most distant found yet and appears as it would have only around 770 million years after the Universe began. 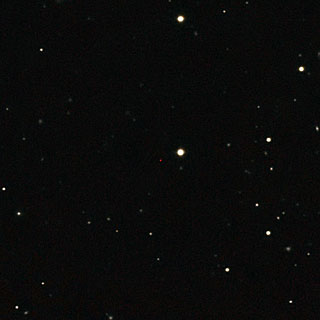 The Big Bang explains how the universe started as nothing. Then for no apparent reason, in an instant, there was everything and it rapidly expanded and is still expanding today.

At first the universe was simply energy and so concentrated so it was very hot; many, many times hotter than our sun, probably about 10 billion degrees. As the universe expanded the energy became less concentrated and the universe cooled. As it cooled to around 3000°C atomic particles formed.

At first the only atoms of matter were hydrogen and helium. Hydrogen was the most abundant. It is also the simplest and lightest element. Helium is more complex and is twice the weight of hydrogen and is much less common than hydrogen.

Over time the helium and hydrogen formed clouds due to gravity. As they became packed together they heated up and became stars. As the stars formed they in turn caused a concentration of gravity and they pulled together to form galaxies.

Around 4.5 billion years ago our sun formed. By this time other heavier elements, like rock, metals and heavy gasses like oxygen had been formed by the deaths of earlier stars. The heavy elements left over from the creation of the sun collected in orbits around it to form planets, moons, asteroids, meteors and other solid objects. Around 3.5 billion years ago life appeared on Earth.

The Universe continues to expand today. It is uncertain whether it will continue to expand forever or at some time in the future slow down and start to collapse. This is the subject of intense debate amongst scientists today.

The biggest problem with this theory is that there is nothing before the universe. The big bang would need a trigger to set it off, but what created the trigger and what came before the trigger etc. It's the classic chicken and egg dilemma.

The Steady State Theory describes the Universe as being always in existence. Very small parts of matter are always 'popping' into existence and parts are evaporating into energy to maintain the volume of the universe.

The problem is that there is no beginning or end, which is difficult to comprehend. A more convincing argument against the steady state theory is the observation that the universe is devloping. A steady state would mean that objects of the same type would exist everywhere and wouldn't change, where in fact certain types only appear in certain place. For example quasars are only found to be a long way away and never nearby, indicating that they are from the distant past and don't exist anymore.

The Regenerative theory is similar to the Big Bang but doesn't have everything starting in the same place at the same time. Instead it assumes that everything has it's own cycle of expansion and contraction. As a particle contracts back towards the center it flies straight through and expands on the other side. In this way the universe is continually regenerating itself.