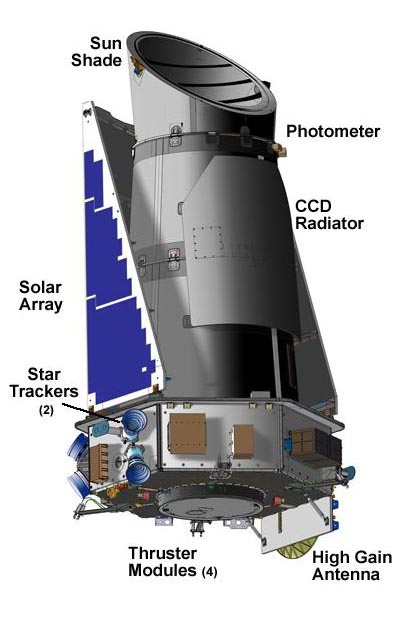 The Kepler spacecraft is designed to fulfill NASA's first mission to locate Earth sized planets orbiting other stars. The mission was originally planned to continuously monitor 100,000 stars in the Cygnus Lyra region of space for 3.5 years, extendable to at least 6 years. Kepler is in orbit around the Sun and reports health and status twice a week and sends scientific data once a month.

So far many planets have been found but the main objective is to find one that is between half to twice the size of Earth in what scientists call the sweet zone - a habitable zone where water might be liquid and life may exist.

The Transit method of detection

In a similar way, planets cause a small dark area on the visible star. The change in brightness of star affected by a planets transit can be from anywhere between one hour and more but is very, very small. For a change that has been detected to be considered to be caused by a planet it has to be periodic, that is to say the cycle repeats itself over and over again on a regular period of time.

The Kepler space craft was named after the famous astronomer and mathematician Johannes Kepler who lived during the 17th Century. Kepler devised three laws of planetary motion:

Once the planet's orbital size and the size of the star are known the temperature can be calculated. This information is key to knowing if the planet may or may not be habitable by life similar to what we know exists on Earth.

The Kepler spacecraft is built and operated by NASA. See the NASA web for lots of detailed information about this truly fascinating project.