There is a very high cost associated with putting a payload into orbit. There are also logistical problems that need to be overcome. Any large project has to be broken down into modules in order for the pieces to be transported into orbit , assembled and utilised. Different types of journey, Earth to orbit, Earth to the Moon, Earth to Mars for example, have different requirements that cannot all be satisfied by a single piece of equipment or mode of transport. It would make sense to have some sort of way point in space for use as an interchange from one system to another. 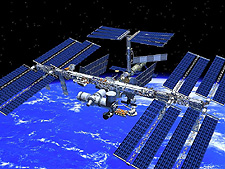 Long term stays in space need some permanent habitat for researchers, engineers and scientists to carry out their experiments without having to travel to and from Earth regularly.

Space Stations are commonly held to be the answer to these problems. A Space Station is a large permanent base in a fixed position that has living accommodation, facilities for a range of technical equipment and the means to dock manned or unmanned space craft that ferry people and supplies to and from Earth.

The International Space Station is in orbit around 350 km above the Earth. The first components were assembled in orbit during 1998. Since then more modules shave been added on. In 2000 the first crew arrived and the ISS has been manned ever since. The ISS can accommodate six crew members, mainly scientists and engineers, who carry out lots of experiments and research. The ISS is huge in comparison to other spacecraft. Crew and supplies are ferried to the ISS using a Soyuz spacecraft. The ISS is an important step in sending people further out into space - it is being used to test the long term effects of living in space on people. It will also server as a staging post for future exploration, with vehicles being assembled close by and the crews preparing for their journey there before setting off.