Project Mercury was America's first program aimed at putting a man in space.

The three objectives of the project were:

The project was initiated in 1958 and lasted nearly five years; being concluded in 1953. 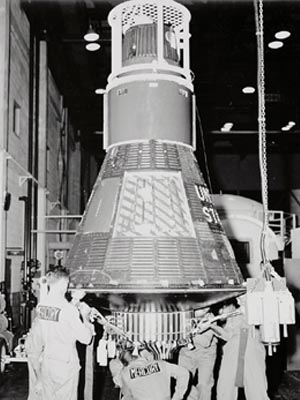 The manned spacecraft was a single seat cone shaped capsule. The base of the cone housed retro-rockets to slow the capsule's speed of descent on re-entry and was fitted with a heat shield to withstand temperatures of up to 3000 degrees generated by air friction as the capsule entered the atmosphere.  Each capsule was named by the astronaut; the number 7 was added to respect the number of astronauts in the team.

In total the program consisted of six manned flights: