The Apollo and previous missions had utilised disposable technology. Most of what went into putting a payload into space was unrecoverable. A more cost-efficient means of exploring space was deemed necessary. The United States of America's answer was the Space Shuttle, a modular system that included a reusable Orbiter Vehicle, two re-usable booster rockets and a disposable External Fuel Tank that carried the fuel required to reach orbit. 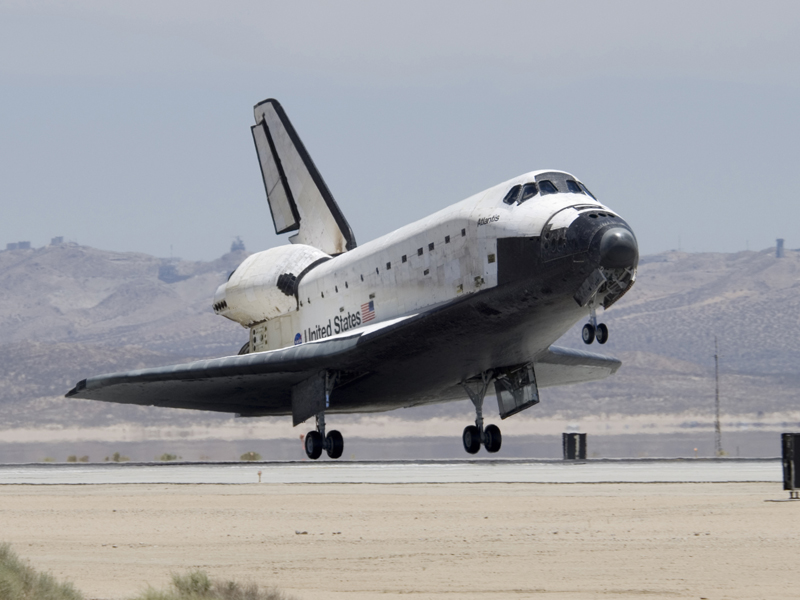 The system was officially identified as Space Transportation System (STS). The first orbital test flight took place in 1981 with operational flights beginning in 1982. The shuttle was in operation for thirty years until July 21, 2011, when the fleet was retired. Up to that date there had been 135 Shuttle missions carrying a variety of payloads into orbit including satellites and the Hubble Space Telescope.

The first OV was called Enterprise and was used for Approach and Landing tests. Five operational OV's: Columbia, Challenger, Discovery and Atlantis and Endeavour were completed.

Challenger was lost in 1986 due to the failure of a rubber 'o' ring seal in one of the booster rockets. The 'o' ring was exposed to low temperatures on the launch pad and became brittle. As Challenger was accelerating the 'o' ring failed and directed a stream of very hot gases at the external fuel tank, which was full of liquid hydrogen and liquid oxygen. Challenger was destroyed in the resulting explosion with all seven crew members being killed. Endeavor was built to replace Challenger.

Columbia was lost in 2003 during re-entry due to damage to the Thermal Protection System (TPS) on part of the leading edge of one of the wings. The TPS consisted of a range of materials to protect the Shuttle from temperatures in excess of 1,260°C. Tiles damaged during take off failed during re-entry exposing critical parts of Columbia to high temperature; the spacecraft simply disintegrated killing all seven astronauts.