What is an asteroid

An asteroid is a lump of rock orbiting the Sun. There are lots of them and they tend to clump together in a band between Mars and Jupiter. They are not big enough to be planets although a few of them are the same size of some moons. One even has its own moon.

Asteroids aren't big enough to generate the amount of gravity necessary to make themselves spherical so they come in all sorts of shapes and sizes. They are thought to be the leftovers of a planet that never got created because of Jupiter's strong gravitational pull. 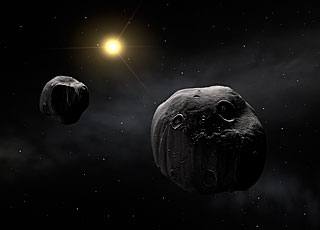 Where are the Asteroids

A few thousand asteroids have their own eccentric orbits that cut across the paths of other planets.

How Many asteroids are there?

There are millions of asteroids. A few are quite large, being a little over half the size of our own moon. Most though are only a mile or so across.