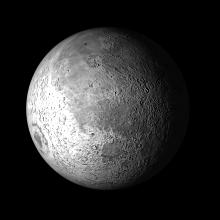 The Moon is Earth's only satellite. As evidenced by the huge number of impact craters the Moon has had a violent past. Nothing much though has happened over the last three billion years or so. The Moon has no atmosphere, water or current volcanic activity, so the craters have remained undisturbed since they were formed, other than by subsequent impacts that have created more craters over them.

The Moon always presents one face to the Earth so it's far side has been a relative mystery until mapped by spacecraft in the 1960's.

The Moon is the only other planetary body that men have set foot on. Between 1969 and 1972, as part of the American Apollo program , twelve men stepped upon the surface of the Moon. Equipment and sensors can still be seen where they were left. The Moon has no atmosphere or weather so the astronauts footprints will still be there centuries from now unless obscured by later arrivals.

The Moon is comprised of different materials than the Earth, a fact determined from the many samples brought back by the Apollo missions. There is evidence of water on the Moon trapped in other materials. This would be a significant factor if people are to colonise the Moon in the future.