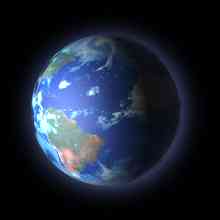 Earth is the planet we live on. It is the third planet from the Sun. The Earth is the one planet in our Solar system that is known to support life.

Origins of the Earth

The Earth, like the other planets in the Solar System, was created from leftovers of the Sun around 4.5 billion years ago. A process of accretion swept up the debris in orbit around the sun to form a large mass of rock. Gravity acted upon this mass to make it reasonably round. At first the Earth was very hot and inhospitable. As it cooled down elements such as water formed and eventually, around 3.5 billion years ago, simple living organisms came into existence.