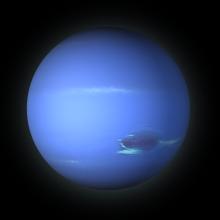 Neptune has a methane atmosphere that reflects blue very well giving it a characteristic bright blue colour. Occasionally white clouds appear on the surface of the planet but otherwise it looks very tranquil. The truth, however, is that the surface is in a very agitated state having winds in excess of 2000 kph. A large dark area was discovered and named the Great Dark Spot, which rotated once every sixteen days.

Neptune was only discovered in 1846 as a result of its gravitational effect on neighbouring Uranus.

Neptune has a mantle made up of ice that surrounds an iron core. The atmosphere is mainly hydrogen, helium and methane.

Neptune as some faint rings made up of mainly icy dust.