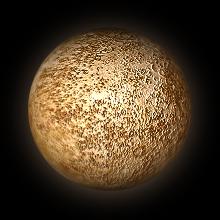 Mercury is the closest planet to the Sun. A day on Venus is 176 Earth days. During the day it is so hot that it would melt lead. At night it's colder than the polar regions on Earth. It takes Mercury only 88 Earth days to complete an orbit of the Sun, making the year shorter than the day.

There is virtually no atmosphere on Mercury and its surface is cratered, the result of impacts during the first few million years of the Solar system.