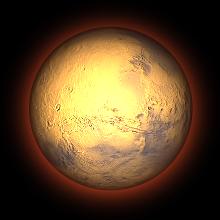 Mars is commonly called the Red planet because of the colour it has from the rusting iron dust on its surface.

Not too long ago people used to believe that Mars was populated with a people that had made a network of canals across the planet. From more recent investigation by astronomers and probes that have actually visited Mars it has become apparent that these so called canals are natural formation. Nevertheless, investigations to discover life on the planet continue, with probes looking for small microbes that live in the soil.

Approximately half of the surface of Mars displays evidence of past volcanic activity. The highest mountain in the Solar System, called Olympus Mons, is to be found on Mars. Rising twenty three kilometers above the plain the extinct volcano is a testament to how intense the volcanic activity must have been in the past.

The atmosphere on Mars is mainly carbon di-oxide with a small mix of other gases such as nitrogen and argon. Despite Mars' inhospitable environment, and its relatively small size compared to Earth, there are serious plans to establish a small colony there. Mars has some water but the atmosphere would be deadly to humans and most other life as we know it. A colony would be highly dependent on technology to sustain the conditions necessary for an existence there. Ionizing radiation is not filtered by the thin Martian atmosphere as it is on Earth so precautions against exposure to radiation are required to prevent damage to DNA.

Unmanned robotic probes have already been to Mars. Manned missions are planned in the future to continue the exploration of Mars and further our knowledge of living in space.

Towards the end of the 19th century and into the begining of the 20th century astronomers could make out features on Mars that were apparently orientated in patterns of straight lines. These features became identified as canals and some even considered them to be the artifacts of an ancient Martian civilisation. As telescopes developed and higher resolutions became  available it began to be thought that these features were the result of ordinary features like craters being merged together in a blurry image due to the limited optical capabilities of the telescopes of the day. It was only in the late 60's and early 70's when photographs were taken by Mariner space probes that the myth of canals on Mars was finally dispelled.

Mars has some huge volcanoes including the biggest in the Solar System. At a height of 22,500m Olympus Mons, located in the western hemisphere, is just over two and a half times higher than Everest, the highest mountain on Earth.

There are a number of reasons that the volcanoes on Mars are so huge: there are no tectonic plates on Mars, so a volcano sits on the same spot all the time, slowly growing with each passing year; the crust of Mars is twice as thick at the Earth's crust and so can support much larger masses - Olympus Mons would simply sink into the crust on Earth due to its massive size; the Martian atmosphere is so thin with no atmospheric water there is nothing to wear them down.

Volcanic activity is finished on Mars; the core has cooled below a temperature that can sustain volcanoes, so the likes of Olympus Mons has probably reached its maximum height.