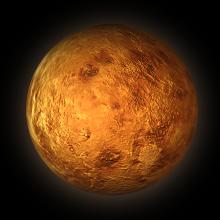 Venus is the second closest planet to the Sun but is much hotter than the closest planet Mercury; the dense carbon dioxide atmosphere traps the sunlight and raises the temperature to over 480° C. The planet is made even more inhospitable by a rain of sulfuric acid.

The cloud that causes this harsh environment totally envelops the e planet and makes it very difficult to visualize the surface. Between 1990 and1992 the spacecraft Magellan mapped around 99 percent of the surface of Venus using radar. The surface is mainly rocky plains made from lava flows. There are some large mountains, Maxwell Montes being the highest at 12 km.