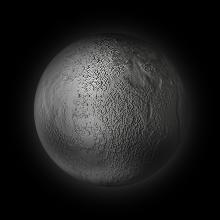 Pluto is the most distant planet in our Solar System. It was discovered in 1930 when astronomer Clyde Tombaugh attempted to determine the cause of the erratic orbits of Neptune and Uranus.

There is very little known about Pluto. It is thought to have a large rocky core surrounded by a mantle of ice with an atmosphere of mainly methane and nitrogen.

Pluto has a very eccentric orbit that takes it far out into the outer limits of our Solar System and then back inside the orbit of Neptune. It also orbits on a different plane to the other planets.